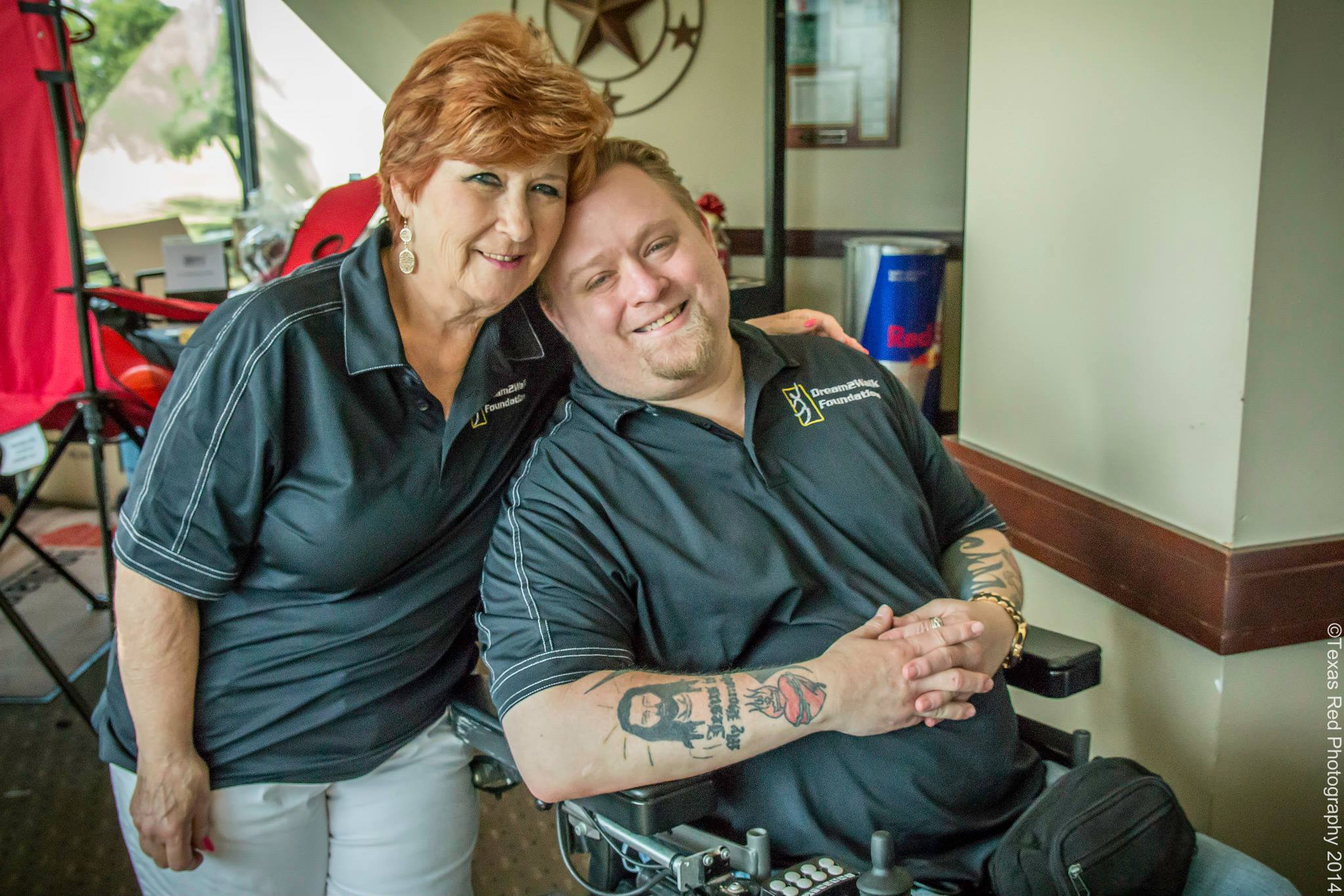 The voting process starts May 1and ends midnight May 31, 2016 but until then you can go to www.mobilityawarenessmonth.com and vote for Stewart Morrison from Plano, T.X.  everyday through the end of the contest.  If you answer the daily question (found in orange box “Get Extra Vote” your vote will count twice, the whole process is quick and easy so please help Stewart win this thing so he can do even more for Dream2Walk and the Spinal Cord Injury Patients we support!

To vote follow the link below and thank you again for your support.  As Stewart always says together we can make a difference!

He is so honored to be submitted into this contest for a shot at a $50,000 Custom Accessible Van and were so very proud of him so together “Lets MAKE THIS HAPPEN”!

This is our president Stewart Morison’s story as written by his Mother, Angela Morrison!

Please take the time to read and VOTE and SHARE so Stewart can have the much needed independence with an accessible Van both for his personal life and work for Dream2Walk.

Thank you in advance for your support, please VOTE Daily and remember voting ends May 31, 2016!

“My name is Angela Morrison and my local hero is my son Stewart C. Morrison. In 2006 Stewart had to be admitted to the Emergency Room with what was diagnosed as a light case of pneumonia in one lung. It spread very quickly within 24 hours to all over both lungs. He was soon on life support and in an induced coma, we were not given much hope of his survival, but thank God he did. Two weeks later they removed the breathing tube but later that day he flatlined for a few minutes, during that time he was looking down on himself from somewhere up above. He was then put back in a coma. Later they gave him an MRI and Spinal tap and we learned what caused the paralysis and the eventual diagnosis of Transverse Myelitis was undiagnosed Meningitis.

After 3 months in the hospital and rehab, he came back to live with me. I was newly divorced and had a job with a paraplegic with no control over his bodily functions. The medications and supplies were so expensive the first few months but he was later able to get Medicaid and 2 years later medicare. He was in a dark place for quite some time, but he got stronger later and decided to do some thing positive with his life.

Stewart knew how hard it was for him and others to afford the kind of treatment that is needed to become stronger and more independent. He started The Dream2Walk foundation, a 501c3 non-profit company, to help others get their much needed therapy. He was only able to launch the company with the help of some of his friends from college and previous relationships. The hope is that he can also earn some rehab training for himself at exercised based recovery centers and in some cases at home with licensed therapists. Dream2Walk raises money with Golf Tournaments, Concerts, Casino nights and other fundraising events.

Stewart has not had a vehicle since this all happened to him. He needs an accessible vehicle not only to help with the foundation but to also gain some personal independence. It would also help me since I have to work and also take care of my 94 year old Mother also.”

as written by Herbert Sandecki in 2014:

“Most people do not come back from the dead. But, thankfully, Stewart Morrison is not most people.
At age 27 the entrepreneurial Stewart had already succeeded with a small business. However, wrong decisions sent him back to the starting line. Then a good friend passed away. So, in 2006, as Stewart drove to the wake, he thought he had reached the lowest point. He was dead wrong. He would be stricken, halfway to the wake, by an illness that would progress to the point where Stewart would be dead for 4 and 1/2 minutes. At that point, when there truly was no further down that one could go, he started his return trip.
This story could fill with what a long-term hospital stay, with Transverse Myelitis, is like. But, what is important is that leaving the hospital for outpatient therapy, Stewart found that the “experts” were not interested in returning him to his feet, but rather, teaching wheelchair life. So Stewart sought out physical therapy for him, and his legs. He learned of Project Walk, with a facility in Austin Texas. However, he needed to either raise the money for himself to attend or do something to earn a grant from them. This serendipitously led to his creation of the Dream2Walk foundation. An organization uniquely dedicated to assisting wheelchair-bound people to attend physical therapy specifically aimed at getting them back on their feet. As of this writing the Foundation, now aided by ‘Executives in Action’ has provided 269 hours of physical training, for the initial 5 recipients; see Dream2Walk.org for their stories. Ironically, Stewart is not one of those people. His personal character will not allow him to take advantage of the very Foundation that he founded. In fact, he even donated the $1,000 he initially raised for himself to attend Project Walk, Austin, to someone who lived closer to it; as a Project Walk facility opened in Addison, Texas; nearer to his home.
Running a nonprofit such as the Dream2Walk foundation takes time and effort. It also requires getting around to different places and meeting many people. Something that is very difficult for Stewart, as he is without his own transportation. What money he does have is spent on time at Project Walk. So your vote for Stewart is helping him and the Dream2Walk Foundation; and that assistance will enable the Foundation to help more people.”

To vote follow the link below and thank you again for your support.  As Stewart always says together we can make a difference!

The Dream2Walk Foundation is a 501(c)(3) tax-exempt non-profit public charity.

Our mission is to help people with Spinal Cord Injuries achieve a better quality of life during the recovery from their injuries & learn to walk again.

We award therapy scholarships to people in need of financial assistance at approved recovery based therapy facilities.

In November 2019 we began working with MYOLYN to provide personal home use MYOLYN FES Bikes that use functional electrical stimulation (FES) to empower you to achieve therapeutic exercise and functional outcomes, despite muscle weakness or paralysis caused by disorders like spinal cord injury, multiple sclerosis, and stroke. FES works by using small amounts of electricity to help muscles contract and produce functional movements.

It is our hope, with your support, to ensure a better quality of life during the recovery process an attainable Dream for as many Spinal Cord Injury Patients as possible!